When my husband and I were first dating, we were two busy, dirt poor graduate students who were still attempting to eat somewhat healthy. Between my hours in the research lab and his class schedule, the time we had left to cook and actually eat together was anywhere from 30 minutes to an hour. As someone who loves to cook, and occasionally make over the top meals, this time frame was a challenge – especially when it came to having more creative meals.

The time crunch facilitated the creation of one of our all time meal staples; the Protein Power Bowl. It started out more simply with only three ingredients that we always had on hand: ground turkey, quinoa, and hummus. This way, the excuse of “no time to go shopping” never happened on these nights.

As we started to have this meal more frequently – since it takes less than 30 minutes to prepare – I decided the one thing it could definitely use more of was… veggies. Enter adding the spinach and onion to the recipe.

To me, the best part of this recipe is its versatility. If you are working with picky eaters, the veggies can be swapped with any other that your family prefers. If someone isn’t a hummus fan, guac is another fantastic substitution. 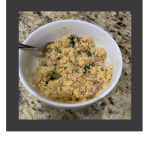 One of the reasons this recipe is a favorite of my husband and I is that it is so versatile.  We’ve used other vegetables mixed in or alternate seasonings to change the profile.  Another great topping if you are not a fan of hummus is guacamole.
Tweet
Share
Pin2
Share1
3 Shares
Previous Post: « Doggy Day Trips
Next Post: Orvis Memory Foam Dog Bed Review » 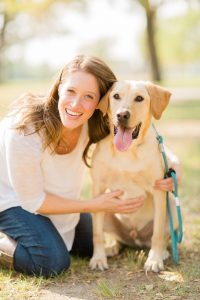 Hi and welcome to Squat Run then Coffee! My name is Emily, and this is my pup Jordy. I am a PhD Nutritionist and yoga instructor here to share the ways I've found to maintain a healthy lifestyle as busy young professional as well as some pup-friendly travel ideas!

This website uses cookies to improve your experience while you navigate through the website. Out of these cookies, the cookies that are categorized as necessary are stored on your browser as they are essential for the working of basic functionalities of the website. We also use third-party cookies that help us analyze and understand how you use this website. These cookies will be stored in your browser only with your consent. You also have the option to opt-out of these cookies. But opting out of some of these cookies may have an effect on your browsing experience.
Necessary Always Enabled
Necessary cookies are absolutely essential for the website to function properly. This category only includes cookies that ensures basic functionalities and security features of the website. These cookies do not store any personal information.
Non-necessary
Any cookies that may not be particularly necessary for the website to function and is used specifically to collect user personal data via analytics, ads, other embedded contents are termed as non-necessary cookies. It is mandatory to procure user consent prior to running these cookies on your website.
SAVE & ACCEPT